When I saw the cover of High & Dry by Stephen M. Park, I had a feeling the book was going to become a body of work of some note (or, rather, legend). When I spoke to Greg Gerding about the new mysterious author on his book label, University of Hell Press, he became very animated and excited. If such an up-and-coming publisher as Gerding gets that excited about a book that he is putting out, then it is definitely something I need to take notice of! So, as the curator of reading series Them’s Fightin’ Words, I asked Gerding if he could hook me up with Mr. Park to be one of my feature readers. The affirmative response was quick. Apparently, this was the first time 65-year-old Park had ever read. So, before the reading, Park and I had an opportunity to discuss our distaste for e-books, cell phones, videos games, and computers.

How much of the book is autobiographical?

“100%. In terms of events and how they happened is true. It’s funny. People don’t believe me. Initially I was offended by that but then asked myself, Is that so bad that people believe I lived an unbelievable life? Because I grew marijuana for 30 years, I had to hide myself, so I self-published a couple hundred copies. Sent copies to a few publishers and agents, which were ultimately rejected. Nobody wants to publish a 65-year-old man, except Gerding. I really like Gerding and will forever be grateful.”

Did you have inspiration for using a pseudonym, other than hiding your identity?

“I wanted to protect my friends, but all they really care about is if you mention them at all. However, come to find out that anything written is inadmissible in court. When I was going to Cannabis Cup in 1995, I knew 60 Minutes was going to be there, so I wanted to use a pseudonym. At the time I was organizing a reunion for Wilson High School and thought, What a great idea. So I have been writing as Wilson High ever since.”

What inspired you to start writing?

“When I was attending Lower Columbia College, one of my professors said to me, “You have a gift for storytelling, so go out and have adventures.” I have been reading at least a book a day since I was a small child. It’s the only ambition I ever had, considering I am a person with no ambition. What changed writing for me, having tried writing novels before, was 1) Thompson’s Fear and Loathing and 2) most significantly, Bukowski. I was sitting (somewhere) when a friend came in with Notes From a Dirty Old Man. What was transformative was the effect it had on other people. From that point in my life I had been trying to write this book. I couldn’t figure out a way to tell the story. It took me decades to find that narrative voice. It is the only thing in my life I ever bore down on. Took me a long time to grow up, reading old treatments I did. Most were flat. I always admired good writers in their 20s because it was something I had to work at. Yet, at 65, it is now that much more satisfying.”

So you also draw all the illustrations in the book?

“When I was young, all I did was draw, but quit for nearly 20 years. The thing about art and cartooning is that it is what anyone would do, if they didn’t have better things to do. After starting again after all those years, I regained that cartoonist mentality, an absurdist perspective, what goes on behind the eyes. It has been fun combining the two. I was the artist in the jock family, the writer and drawer.”

Anything else in the works?

“I sat down to start writing another one. It has never flowed so easily. The trick is doing comic strips, in the small panel. It’s like walking into a warehouse and having to narrow it down to one sentence. As a writer, I have always wanted words nailed down to paper. Now I don’t have to struggle so hard. It is not as grim a battle.”

You mention you are moving to Port Townsend?

“I found this uh … I’m a grass is always greener kind of guy. I always wanted to be an army brat, in a new school every year. I really love the new. It’s been kind of crazy staying in Portland for so long. Where do I want to go to die? Because that is what it is at this point in my life. Every time I go to Port Townsend, I like it more than the last time. Port Townsend is ultimately a boomer town. I have to take this house and make it salable. I haven’t done anything for 25 years and now I am paying for it. I lived my whole life without ever wanting to own my own home. At 65, I still feel like I am 35, because of my mother who has never been ill. I should be in a wheelchair for some of the shit I’ve done.”

You told me you like to read mystery. What else do you read?

“I don’t really read poetry. I do however really enjoy all the writers on University of Hell Press.”

If you could give advice to young writers today, what would it be?

“If I could go back and meet my 10-year-old self, I would say, “You are going to be astonished at what a plugger you are. You can’t give up writing.” It took me 20 years to find a narrative voice and 5 to write it. I admire young writers who can just sit down and flesh it out. Fuck all the other shit; if your life is going to have any meaning, the joy is in the process. It’s like drawing, I have no interest in it once it’s done.

“I just hope it makes them laugh—another reason I wanted to write about when I went through hell.” 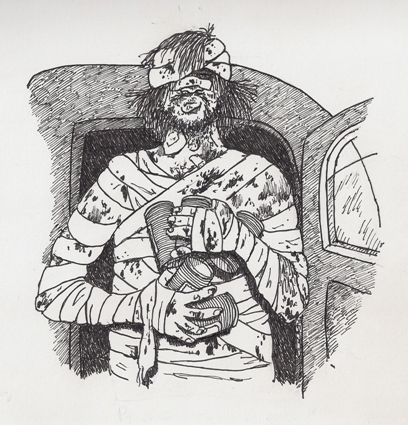