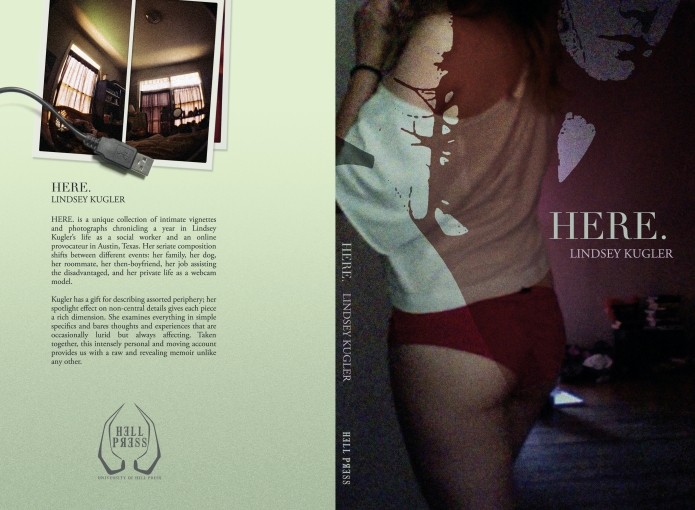 HERE. is a unique collection of intimate vignettes and photographs chronicling a year in Lindsey Kugler’s life as a social worker and an online provocateur in Austin, Texas. Her seriate composition shifts between different events: her family, her dog, her roommate, her then-boyfriend, her job assisting the disadvantaged, and her private life as a webcam model.

Kugler has a gift for describing assorted periphery; her spotlight effect on non-central details gives each piece a rich dimension. She examines everything in simple specifics and bares thoughts and experiences that are occasionally lurid but always affecting. Taken together, this intensely personal and moving account provides us with a raw and revealing memoir unlike any other.

While at a wake, I waited with my mother for her relative-in-law to come around and receive sympathy. My aunt puffed on her cigarette and leaned over to tell me I had a great set of tits and should become a stripper. I didn’t know what to say so I said thanks.

There was a big difference between the money I made with my hair straightened versus the money I made when it was left to its naturally curly texture. However, there were some nights I left it wild because some visitors paid more for something different. Jack was one of those visitors. He sent me a message asking me to recreate the scene in Ghostbusters where Sigourney Weaver seduces Bill Murray, possessed. He said he would pay for everything—hairstyling, costuming, even furniture. He wanted me to recreate the scene as closely as I could. On top of that he offered to pay me more money than I was ever offered on the website before. I said thanks but turned it down.

My then-boyfriend was always hit on by the baristas in the front of the house. The owner hired very Austin-looking girls. They never wore bras, had gorgeous tanned skin, and effortless just-fucked hair. My then-boyfriend told me he hated the attention but they were the only stories he told me about work. I walked to Cherrywood to buy a bottled Coke. One of the baristas, Shannon, told me she had been waiting to share something funny with me. I pored over the pastry case thinking about the cinnamon rolls. She told me she had a fling with another cook in the kitchen and right before she orgasmed she called him by my then-boyfriend’s name. I asked for a cinnamon roll and left.

I woke up, washed my face, put on my business casual, and strapped on shoes. Walking out to my car I felt the November wind hitting my face and hands. I tried to walk faster and as I approached I saw my driver’s side window was smashed in. The glass of the window, now reflecting shiny turquoise, lay all over the seat and the backseat of my car. I stood in the middle of the road looking at it. The stereo was pried out and cords were frayed and exposed. I reached out and pushed in some of the glass that clung to the door. It cracked and fell onto the driver’s seat noiselessly. Just then a couple of older women were speed walking by with pink visors and a golden retriever. “Oh!” one of them gasped. “Did someone break into your car?” I looked over my shoulder and watched them speed walk past. They didn’t stop. “What a shame!” one of them called out as they moved down the road, pumping their arms back and forth. I went back inside and called my office to let them know I’d be late.