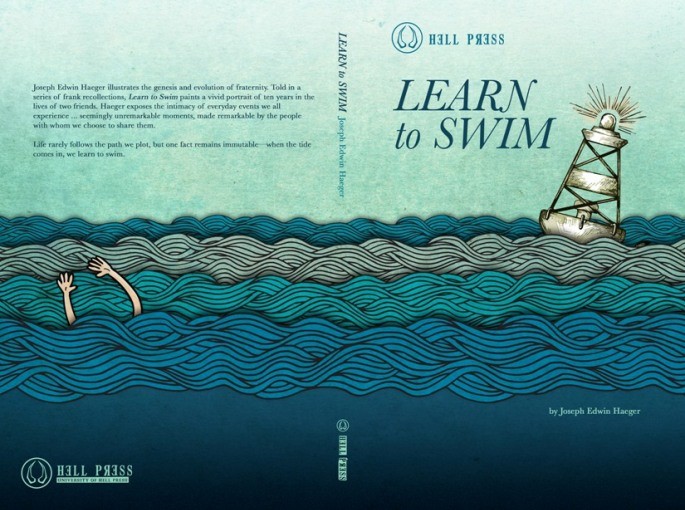 Joseph Edwin Haeger illustrates the genesis and evolution of fraternity. Told in a series of frank recollections, Learn to Swim paints a vivid portrait of ten years in the lives of two friends. Haeger exposes the intimacy of everyday events we all experience … seemingly unremarkable moments, made remarkable by the people with whom we choose to share them.

Life rarely follows the path we plot, but one fact remains immutable—when the tide comes in, we learn to swim.

Opening Chapter from Learn to Swim

“Why did you use your wipers?”

“What happened to making life art?”

He hugged me harder than anyone ever had.

I met him in fifth grade. He had moved from Seattle. We were in the same class. We were on the same soccer team. And we went to the same church.

I walked up to him and asked how he liked playing soccer.

He stared up at me from his desk.

I saw him that night at practice.

We began a casual conversation at soccer games. Nothing that I would have expected to lead to a friendship. I was content with the friends I had and didn’t think I needed any more. Talking with him was just something to pass the time.

The coach played the same boys every game, for the entire game. He and I would stand on the sidelines, restless, and eventually get bored and wander away from the sport we were supposed to be playing.

One day we were on a shed. Not for any particular reason; we just realized we were big enough to climb on top of it. It wasn’t tall, but seemed like it was at the time.

An Elderly Man walked up to us and said, Hey get off that shed, you two shouldn’t be up there.

I’ve always lived the life of a coward. I began to step down until I noticed him.

He stood tall, looking down at the Elderly Man. He wasn’t attempting to get down.

You guys need to get down, the Elderly Man repeated.

I continued my way down.

He stared the man in the eyes.

The conclusion begins its downward slope.

When he first moved here he sat with the cool kids at lunch. He was becoming one of them in the first two weeks.

He played footsie with the cute girls.

He played tag football at recess with the boys.

Then we started talking and he sat with me and the other self-declared rejects at lunch.

I wonder if he ever regretted this decision.

When did we grow up?

He came to stay over one night. It was the first time we were spending the night at one another’s house. He had packed a bag with all the necessities.

I used to go to friends’ houses in jeans, a T-shirt, and with a toothbrush.

My Cousin was there. We were watching movies and getting rowdy.

My Cousin jumped on his back when he was bent over.

Tears came to his eyes as he packed his bag, preparing his exit.

He made his way to our front door with his bag in hand.

“How are you going to get home?”

He looked at me. Dropped his bag. And followed me back to the living room.

I woke up to a phone call.

He told me he was so near a tornado he saw a floating house.

He told me he was in an earthquake where the earth burst and split open. That His Mom purposely drove the car in front of them into the crack. That His Mom killed a man.

He told me he had a half-brother.

I still don’t know if I believe him.

We lived a fourth of a mile apart. It was the same suburban neighborhood. We would ride our bikes to each other’s houses.

Our desires matched more closely than I had originally anticipated.

When we rode in our parents’ cars no one could understand what we were saying.

But we understood each other’s mumblings.

In his basement there was a crawl space behind the furnace. It was under the stairs.

We crawled back there with a flashlight.

Girls, from the previous owner, had left the names of the boys they liked scrawled on the drywall.

We also found a crude felt-pen replica of a famous piece of art.

We both decided it was the Mona Lisa.

It’s like that Boy Meets World episode where Cory gets married.

Kids from another team stomped on my water bottle and put bits of dirt and grass in it.

Our coach patted me on the shoulder and said, Just wash it out at a sink, good as new.

I watched the kids from the other team run to their rides home.

We sat at the counter waiting for the macaroni and cheese to finish cooking.

My Dad asked him what his family was eating that night.

You’re picking this over steak? My Dad asked, Why?

All he did was shrug his shoulders.

I would’ve rather had macaroni and cheese at that age, too.

I convinced him to join my music club. If I brought them new members I got five free CDs. He would get seven for joining.

He didn’t have money to pay for shipping and handling.

He woke up one morning to His Dad on the phone telling the club’s customer service that they couldn’t enter into a contract with an eleven-year-old boy.

I never asked him to join another club.

He liked playing computer games. I never understood why he would pour hours into these virtual worlds.

He tried to get me to play once.

I was content watching him play over his shoulder.

Our group of friends used to play out court at recess sometimes.

I was always the defending lawyer.

Our Redneck Friend was the prosecuting lawyer.

The Leftovers were the jury.

Whoever was the defendant would get banished from playing with us for a certain amount of recesses.

He was banished for a day.

He called me that night to see if he was still banished.

Would Jesus banish someone? My Mom asked.

I called him back.

He told me years later he didn’t know why he was such a dick that day.

“I must’ve woke up and thought, ‘I’m going to be an asshole today.’”

It was a half-day and I went to school excited because of that fact. I arrived to him spitting in my hair. Pushing me over when I went to tie a shoe. Calling me mean names. And I had no idea why.

During recess I snapped and punched him. That was the first time I was angry enough to punch someone.

When he saw the rage on my face he ran. I tackled him and pummeled the back of his head.

I ignored the whistle and shouts from the playground supervisor. I only wanted him to feel pain. I hated him in that moment.

Two days later we were back to understanding each other’s mumbles.

We rented Can’t Hardly Wait. We watched this movie at least two times a year after that.

No one has ever laughed as hard as us when we watched it together.

It’s not as funny when I watch it by myself.

He got his braces taken off. His teeth still didn’t look quite right.

A year later they put braces back on.

Have you seen Dirty Harry? His Dad asked.

Come on, His Dad said, you’re a movie guy, that one is a classic, you need to watch it.

He and I never did watch it.

They found him in the backseat.

His parents got an aboveground pool you could fill with a hose.

The water was freezing.

His Dad wouldn’t let us swim during the rainstorm. There had been thunder.

We thought it would have been fun.

I didn’t think I needed any more friends.

I didn’t think I wanted any more friends.