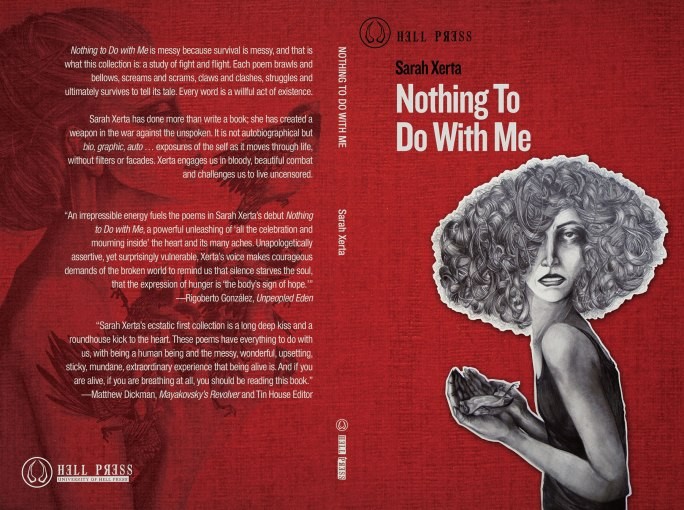 Nothing to Do with Me is messy because survival is messy, and that is what this collection is: a study of fight and flight. Each poem brawls and bellows, screams and scrams, claws and clashes, struggles and ultimately survives to tell its tale. Every word is a willful act of existence.

Sarah Xerta has done more than write a book; she has created a weapon in the war against the unspoken. It is not autobiographical but bio, graphic, auto … exposures of the self as it moves through life, without filters or facades. Xerta engages us in bloody, beautiful combat and challenges us to live uncensored.

“An irrepressible energy fuels the poems in Sarah Xerta’s debut Nothing to Do with Me, a powerful unleashing of ‘all the celebration and mourning inside’ the heart and its many aches. Unapologetically assertive, yet surprisingly vulnerable, Xerta’s voice makes courageous demands of the broken world to remind us that silence starves the soul, that the expression of hunger is ‘the body’s sign of hope.’”
—Rigoberto González, Unpeopled Eden

“Sarah Xerta’s ecstatic first collection is a long deep kiss and a roundhouse kick to the heart. These poems have everything to do with us, with being a human being and the messy, wonderful, upsetting, sticky, mundane, extraordinary experience that being alive is. And if you are alive, if you are breathing at all, you should be reading this book.”
—Matthew Dickman, Mayakovsky’s Revolver and Tin House Editor

Selections from Nothing to Do with Me

Today I am staying in my T-shirt and underwear
with so much sadness
in every ounce of my body, like being cradled
in the achy arms of the flu, and because there is nothing
else to do, I might as well climb onto the rooftop
and think about flamingoes, whose wild pink wings have been flashing
across the white sky of my brain all week for no apparent reason. I might even
light a cigarette. I might even smoke it. I might even call
the first friend I made in college, the poet
who bought me wine and kissed me on the cheek, said I looked
just like his ex-girlfriend and wouldn’t I like
to be his supermodel? Why not be his supermodel
and traipse across the tightropes of his world in six-inch stilettos with a martini in one hand
and a silk necktie in the other, wear lipstick and make movies
in the living room of his dreams? I wonder if wearing lipstick
would make me feel older. Right now I feel like a living room
that needs to be rearranged. My knees keep knocking
into my nerves, which keep tripping
over my anorexia and into
my arms. I hate that I have to keep reminding myself
that I am an adult. I hate that I don’t know
what that means. If Victoria’s Secret knew everything about sexy
they wouldn’t be selling bras. Just white T-shirts
and mango-flavored chapstick. Movies of men cooking dinner while outside
an end-of-August storm creeps over the horizon like a bruise
on your spine you didn’t know was there but like
to press up against because it makes you feel like you’ve done
something. This morning I got the mail from the mailbox
and that was something. I got a letter and that made me happy
but then I realized I had to open it
and I was sad, like tearing apart the seams
that keep a secret, when I opened the letter I thought I heard the sharp
first cry of a newborn, and so from now on I want to keep all my letters
unopened and next to my pillow forever, so that even after I die
they will always be there, the little pile of envelopes
with their little heavens breathing inside.
When I think about heaven I imagine
walking naked into the field across the street where
it’s 1968 and I’m somewhere in Canada
taking pictures of all the small white flowers licking at my ankles so I can make postcards
to send to all the people who live far away, all the people
I’m always thinking of, which is everyone,
every day. When I think about heaven I feel
the way my daughter must feel when she sees
I’ve been crying and offers me her tiny body
to hold. When I think about heaven I think maybe
I should stop thinking altogether and move through the rest of the day
like the water that makes up more than half
of our bodies, how it moves
like a moan through the dark, curving
over the lip of a cup, holding on to itself longer than seems possible,
until the break, the spill, the tiny crash of the drip
of an IV next to the bed like the one that I’m in where
my veins are really no more
or less blue than yours, all these bruises
on my body from an ocean no one has named.

And it wouldn’t be the strangest thing
if I never had sex again, but that’s because I’m having
sex all the time, my eyes like two clits, my ears
like two clits, my mouth …. Today I’m drinking
coconut tea and looking at photos
of women I’ve never met, their spines like hybrids
between xylophones and violins, throats like galaxies, all the moons
sleeping in their bellies, and I wonder
why I’m not a lesbian, why
I don’t want to reach out and touch them.
Then again I don’t really
want to touch anyone. I sort of want you
to want to touch me, but not
enough to let you. I’m like that old
cat lady in an apartment on the dirty
outskirts of a city, except that I’m embarrassingly
young and all my cats
live inside me and they look
more like black-scaled fish and clouds
of plum smoke, small sequin purses and cherry
red mouths, my circus, my kingdom
of freaks. Last night we all
had a party in my bed. It was really sort of awful, the fish
unable to sit up straight and the mouths
without throats, no voices, just all of us sitting there together, hanging
open in the dark. Maybe it was more
of a funeral than a party, the way it hurt
to look at each other, how much
we needed to. I was holding a dead bird and pretending
it wasn’t dead. I was wearing blue polka-
dot underwear, thinking
about my therapist, trying
to lighten the mood. I stuck
my finger in my belly button and said “Hey guys, every-
thing is okay, I promise,” and then I fell
back onto the mattress, thought about Buddha and turned
myself into an enormous
ear, splayed my legs like butter-
fly wings, tried to listen for the vibrations of the invisible
strings holding us in space, holding
me together. But what
is holding me together and how
do I know that I am? Didn’t I say
there was no such thing? I want to
stop saying so much but whenever I shut up all I hear is the hum
of air rushing through me. I hear a rustling like moth
wings, cotton sheets, like Love, the beautiful
woman in bed next to me, turning
her face to the wall the way I used to
with you, sobbing into her hands like a mother.

The Shape of a Heart

The Shape of a Heart

I want to text you naked photos from the bathroom,
lick an ice-cream cone while making eyes at you,
be stupid and cute. And by stupid I mean stop thinking
about cemetaries and morgues, stop wondering
how quickly bones freeze in the winter, and what happens
to the marrow inside, if it dries up like old fruit or
just evaporates into nothing, like all these words
coming out of my mouth, I’ve got nothing
to say because I can’t stop thinking about the five kids
who just burned to death in Minneapolis
because of a space heater. Because God may
or may not exist. Because fire is hot and bodies melt
when they’re on fire. Because we
are inside our bodies and without
our bodies we are nothing. Soon I will be nothing.
I don’t have a television because it’s where the news
comes from, which is almost always bad,
one more white cross on the side of the road and
my nerves will sputter out completely, my organs
come tumbling down the street like
balloons from a birthday party gone wrong.
It’s winter and I love you and
you’ll die someday too, a fact that will never
not make me cry. It’s 2014 and
breathing is still painful, all that clean air
filling up my lungs, except the air’s not really clean,
and most people aren’t that smart,
and right now there are living rooms spilling over with blood,
and right now half the world is covered in light,
and right now there are machine guns
strapped to the chests of young boys,
and right now there are girls
being raped by those boys, those boys
raped by men who used to be those boys.
Fuck the circle of life. Wake me up when your heart
is the shape of a heart, when the bluebird
in your chest decides to be real,
takes a mouthful of dirt with its song.

I closed the door behind you and all the windows
broke open, all the pianos
I’ve always wanted to play
stood in the street below, their soft mouths
opening and closing as they fumbled
for notes to fill the holes in the air tearing
apart around me, like flowers
with fingernails, scratching
themselves to dust. I was afraid
to move, that I might fall
through the floor and die or crash
into the shadow moving around the room, the absence
of you, that if I touched it
I’d drown in the ocean
roaring in my ears, the echo
of my name in your mouth, that I’d be carried
like a shell through time, washed up
on the beach of some planet spinning
at warp speed in a place in the universe so dark even black holes
are afraid of getting lost there. But of course
I moved. I blew my nose. I emptied
your coffee cup and felt like I was digging
a grave. And then the room was a grave
and all my loneliness shoveled itself on top of me, my first taste
of the dying body
that I am. And now that I’ve tasted it, I don’t know
if I’ll ever climb all the way out, if enough of your kisses
could clean this dirt from my teeth, if there’s a piano in the world
that wouldn’t break
under the weight of this song, this life, this party
of one. The sky is a bag full of midnight-
blue bricks, emptying down around me, and I don’t remember
being invited. I don’t remember
saying yes.

2 thoughts on “Nothing to Do with Me”