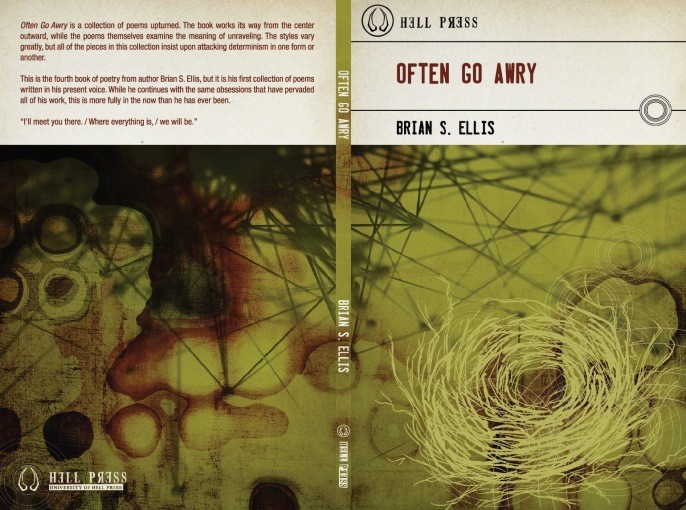 Often Go Awry is a collection of poems upturned. The book works its way from the center outward, while the poems themselves examine the meaning of unraveling. The styles vary greatly, but all of the pieces in this collection insist upon attacking determinism in one form or another.

This is the fourth book of poetry from author Brian S. Ellis, but it is his first collection of poems written in his present voice. While he continues with the same obsessions that have pervaded all of his work, this is more fully in the now than he has ever been.

Service arrives first.
It’s six a.m. in Old Town
and I have to ask a sleeping body
to get out of the doorway.
The Client is the Air Jordan Marketing Team.
Getting out of the office
for the yearly game plan.
Breakfast and Lunch. I count flatware,
make coffee. Chef makes frittata.
Plates at eight.
Marketing picks at the food
like birds, like professionals.
Morning PowerPoint
is on the other side of the half-wall.
The team’s director is talking about
elevated narrative. Peak performance
experience. I bus silently in the dark.
I change tablecloths unseen.
I am surrounded by blueprints
of million-dollar sneakers.
The word Jordan means Success.
The word Jordan means Lethal Agility.
The team is confident about moving
into Eastern Europe but they’re worried
about the brand in Chicago.
Sales are down in the very base
of the flight club.
A member of the team says,
One of our problems is that
all our young J’s are getting shot.
What can we offer them if
it’s not safe to step on the court?
I am pouring house-made
lemongrass soda when the question
is asked. I wonder what the person
who thought of the phrase Lethal Agility
looks like. The director clears his throat
Love of the game, he replies,
as if that answered anything.

Let’s start with the song “Shout”
and work backwards.
Drag the cake out like an endangered species,
like Monster Island, to be cut once
then dragged back into the kitchen.
Service works like a snake or, if it’s not that type,
family style. Or, on rare occasions, buffet.
All weddings are kind of the same.
No two weddings are alike.
All weddings play the song “Shout.”
We have a separate bottle of champagne
for the bride, unless she’s pregnant
in which case, Brian could you check her water?
The groom is in the kitchen
telling us how much he loves us.
The maid of honor is asking if there is a safe
place to put their purses. She says safe again,
maybe looks at me. Or maybe not.

I could be in wine country, at the bride’s childhood farm
in the basement flipping fuses with the fathers
or in the woods, at the state park
hiding behind the unisex bathrooms
with the groom’s little sister
holding her hair as she brings back up
the bottle of Stoli she polished off
before the ceremony.

Before this job, I wasn’t so much
eating every day. But catering companies
will hire anyone who can show up
as evidenced by the number of my coworkers
who are improv comedy actors who talk loudly
and eat all the appetizers, and don’t get asked back.
Meanwhile, I am friendly and everywhere.
Time pouring out of my hands as I balance
dirty wine glasses around me in a motionless orbit.

The possibility occurs to me
that every person
has a certain number of weddings
inside of them,
and with each of these events,
my own chance at marriage
is disappearing.
At a certain point,
good stories become less important
than living the kind of life
I’ve only ever glimpsed
at other people’s weddings.

At a certain point,
falling in love becomes
less appealing than stability.
The cheap trick of inspiration
pales in comparison
to the thick drought of sanity.
I am trying to make this my last year of weddings.
My last year
of showing up at an eastside industrial warehouse
and cleaning up all evidence
of a rave before setting out the tables.
Putting on a wedding requires
thinking on your feet.
It requires putting on the show
no matter what.
It takes inspiration.
One of the few things
in my life I’ve always been able to force.
The only thing
I’ve been able
to hang on to.

When you get asked to come out back
you know it’s not a question,
the way bad dogs know.
Nothing you own is useful now.
Not your mind, which continues
to be unable to alter reality.
Not your desire, which has never
done anything but trap you.
And not your voice, which
you use to beg.
More than anything else that burns,
the begging will burn.
The part of you that can perceive
regret in the future will know
that your only regret about this job
that you no longer have
is that you begged.
The rest of it—the slow humiliation of employment,
the juvenile tenant of your wasted effort,
your boss telling you that your lack of presence
is preferable to your presence—all that you can let go.
But the begging—to plead with the very person
who was wasting the incredibly limited time
you have left in the world with such causal disrespect,
to try and convince the person who represents
this world that hates those who actually know
how to work, and worships personality and circumstance
instead, and to try to get them to see reason—
that’ll stay with you.

Your nose is buried in shit.

You are still trapped in this
completely un-mathematical engine of scarcity
along with these other dead animals
who now, spit in your face.
You won’t be let back inside.
They never give you a chance to flip anything over.
You leave, and feel slightly lightheaded.
The afternoon is suddenly open.
You consider all the methods you know
to make yourself disappear.

Hunger is a thing you can practice, like anything else.
Hunger can make you electric, as you shrink
and grow wild.
Hunger will let you feel everything.

When you are hungry, your enemy is food.
Food promises permanence, but all it does is disappear.
When it’s gone again, you’re back at the beginning.
You’ll have to go through the sick,
and the bile, all over.
Because food is rare, and unpredictable.

The heart is not in the heart.
Not really.
If it could be said to be anywhere, it’s in the skin.
When you’re hungry your heart is your entire surface.
The stomach is a hole that falls entirely through you.
There will never be enough to fill it.
So it’s better to close it.
To clench it, like a fist,
like a heart.