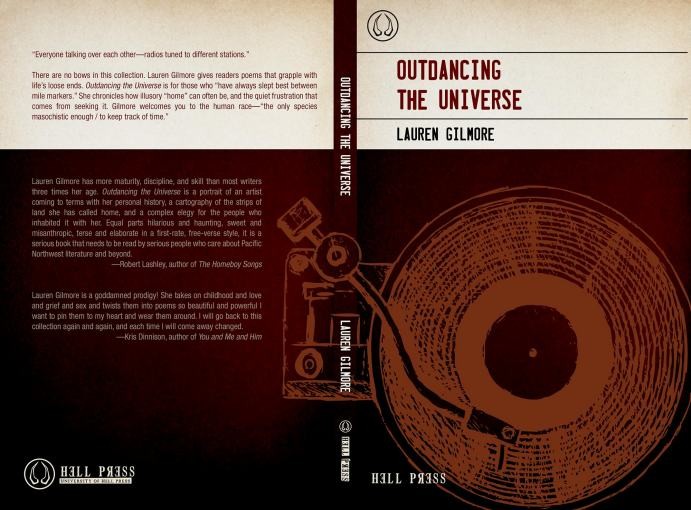 “Everyone talking over each other—radios tuned to different stations.”

There are no bows in this collection. Lauren Gilmore gives readers poems that grapple with life’s loose ends. Outdancing the Universe is for those who “have always slept best between mile markers.” She chronicles how illusory “home” can often be, and the quiet frustration that comes from seeking it. Gilmore welcomes you to the human race—“the only species masochistic enough / to keep track of time.”

“Lauren Gilmore has more maturity, discipline, and skill than most writers three times her age. Outdancing the Universe is a portrait of an artist coming to terms with her personal history, a cartography of the strips of land she has called home, and a complex elegy for the people who inhabited it with her. Equal parts hilarious and haunting, sweet and misanthropic, terse and elaborate in a first-rate, free-verse style, it is a serious book that needs to be read by serious people who care about Pacific Northwest literature and beyond.”
—Robert Lashley, author of The Homeboy Songs

“Lauren Gilmore is a goddamned prodigy! She takes on childhood and love and grief and sex and twists them into poems so beautiful and powerful I want to pin them to my heart and wear them around. I will go back to this collection again and again, and each time I will come away changed.”
—Kris Dinnison, author of You and Me and Him

Selections from Outdancing the Universe

FROM THE HOUSE ON BELT

FROM THE HOUSE ON BELT

My father married a woman who
smoked cigarettes and styled hair
for a living.

She once took up painting,
covered the kitchen table with
newspaper. My father hung

a tree she’d dressed in autumn
on the wall of their living room.
She showed me how to mix

shades of blue to match the sky.
Nothing is ever one color, she said.
Her face changed the night

she slammed the door
and all of the nailed picture frames
came loose. The imitation

calm surrounding their house fell
like a hammer. My father
moved into the spare basement

of some friends across town
in a room without any wallpaper.
We shuffled big boxes

down the stairs, found a new shelf
for his books and DVDs,
dusted off the ashtray. Later,

walking beneath a cloud of nicotine,
he’d tell me a story about the wind
and what it takes:

a painting of a tree he threw
into the field during a thunderstorm
just to watch the canvas bleed.

If springtime ever breaks over Browne’s Addition
and thaws the sleet and snow from those streets
lined with refurbished mansions the city
divided to rent out as apartments
you occupied at various points in your life,
an exposed pack of cigarettes will sit on the pavement.

Maybe a squirrel will appear then
and nibble through the packaging.
Get sick from so much man-made poison
—die, even. Then we would have to bury
the squirrel next to your ashes.
Next winter, the snow would cover you
both, everything coming full circle.

The squirrel won’t know
that was supposed to have been
your very last pack.

It won’t remember me in cloud-print pajamas
racing down the block, inhaling icicles, snow boots
with no socks, hair stringy and stuck to my face
after you said to bury them
somewhere you’d never find.
Or how my hands turned pink and raw
digging through ice.

It won’t know about us at all.
We will try to convince ourselves
we are bigger
more significant
than the squirrel, as though we are not
just as small,
just as alone. Memories get heavier the day
we realize we are the only ones still trying to lift them.

This morning I drove past a car accident
on the way to school—smoke still coming up
from the two engine claws torn apart from
their kiss. And I slowed way down to see if anyone
was crying, what shapes the twisted metal
was making. Sometimes I worry that
staring at one crash while walking toward
another will catch up to me. I am always
floating to doors on the ends of long hallways
turning round and round like corkscrews
in front of me. And the therapist asks me why
I don’t kill myself and I tell her about the love
but not the fear, because I don’t know which
is stronger anymore. And she nods, asks
how I’m sleeping. I wake up an hour before
my alarm goes off, turn over to face the wall.
I climb the stairs and look out over the sink
past the petals of withering flowers given to me
on Valentine’s Day and think about tiny insects
crawling across the leaves. Not enough, I say.

A POEM FOR THE UNINSPIRED

A POEM FOR THE UNINSPIRED

looks at you wrong,

cut off its head. Tape the petals
over your eyes and either

sleep
or pretend to,

it doesn’t make much of a difference
as long as you are dreaming.

One thought on “Outdancing the Universe”