We are very excited to unveil the cover art for Eirean Bradley‘s book the I in team published by University of Hell Press and coming out in stores soon. We will post when and where it will be available. Plus, there will be personal appearances by Eirean in celebration of its release. 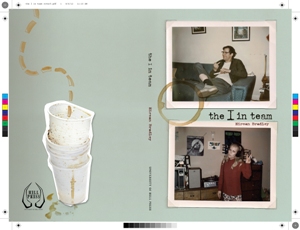 Cover art by our very talented Vince Norris. The two photos that appear on the cover are from Greg Gerding’s own personal collection.

The first time I ever saw Greg Gerding was on the Small Press shelf at Powell’s Bookstore. Being a frugal shopper, I was quite amazed by the immensity of his book, Loser Makes Good, 284 pages to be exact, for $10.00, whereas most books of poetry these days might cross the hundred page threshold and start normally around $15.00. As I flipped through it, testing to see if I wanted to buy his book or a used copy of Rimbaud’s Une Saison En Enfer (A Season in Hell), I was extremely impressed by the transparency of the writer. If he had a soul, which some of his prose poems put that in question, this poet had definitely exposed some of the most charred pieces of it, for each reader individually. Being the avid fan of vulnerability that I am, I decided to have ramen for dinner, and purchase both books, which was a wise choice.

When my friend Eirean Bradley, Portland Poetry Slam’s Slam Master, told me that he was opening a poetry showcase, which was also the book release party for Gerding’s latest endeavor, The Idiot Parade, it not only cemented the awesomeness of Eirean, but made me all the more interested in what Gerding was doing. Apparently, University of Hell Press, Gerding’s publishing company, made primarily to publish his own works, was going to publish a long overdue book by Bradley, the I in team.

Earlier that same month, Gerding co-featured at the Portland Poetry Slam with Denver poet protégé Ken Arkind. Gerding’s performance, however not run-of-the-mill slam material, was definitely moving. Slam poetry has a tendency to bare all and Gerding did just that. He pulled no punches, leaving himself as open as his writing already does, to the reader.

At his book release party, I had a short opportunity to chat with him, thanking him for his courageous writing, and he shared that he enjoyed the interviewer’s poetry as well. In the exchange of compliments, I mentioned that I had all but one book of his whole collection, and he generously offered me a copy of the missing title. A month later, I decided that I wanted to interview Gerding, and he graciously accepted. We met at Backspace, a Portland Chinatown coffee shop that hosts the Portland Poetry Slam. Here is that interview:

END_OF_DOCUMENT_TOKEN_TO_BE_REPLACED

Earlier this year, on March 5th, the Agitprop space in San Diego was the location for Greg Gerding’s Book Release Party for his two latest books, Piss Artist and The Idiot Parade. There was a reading, book signing, and then an after party at Bar Pink with rock band The Stereotypes (celebrating the release for their latest record called Soundtrack).

We realize it’s a little late, but since we weren’t a website yet to help promote, we wanted to at least revisit the evening’s events through pictures and send out some acknowledgments.

First of all, a huge THANK YOU goes to The Latent Print for hosting the night. Please visit their website, like their FB page, and get a taste for the amazing promotional campaign they ran leading up to the event here. They’re doing great things for San Diego artists and they deserve your support. Special thanks to Camille Tallon, she did an amazing job organizing everything and lending her talents. Also, Sophia Pang and Chris Maroulakos. There were many others at The Latent Print we didn’t even know about, thank you too.

Next, we would like to thank the venues, Agitprop and Bar Pink. These two venues and their proprietors continue to bring amazing talent to their stages and are also deserving of your support. Without them, the art and music community in San Diego would severely suffer. To keep up with the latest events at these venues, please visit Agitprop’s website and Bar Pink’s website and like their FB Pages as well (Agitprop | Bar Pink).

Last, but not least, thanks to The Stereotypes for playing a really rocking After Party. If you think you don’t know them, you do, their music can be heard almost everywhere. Visit their website and buy their records, they’re amazing. And like their FB page too to keep up on the latest news.

Here are some photos from the evening:

To see more, click here. Thanks to everyone who came out and supported. We were glad to see you and we look forward to seeing you again.

Greg Gerding, University of Hell Press founder and writer, will be facilitating a writing workshop this Sunday, October 30th starting at 6:00pm at Backspace in Portland, Oregon. Everyone is welcome, please join us. The writing exercises will focus on editing and revising, so please bring along some pieces you would like to work on. Greg will also be available for one-on-one time to discuss your writing or any writing projects you are working on.

Stick around afterwards for the Portland Poetry Slam.

Final editing of Eirean Bradley’s book “the I in team” has just been completed. It passed through both of our illustrious editors and our slacker founder. Next up, it goes to our graphic designer for layout and cover art. Stay tuned… we will be teasing you with excerpts from Bradley’s book right here. In the meantime, please enjoy this video of a performance by Bradley in May.