When I saw the cover of High & Dry by Stephen M. Park, I had a feeling the book was going to become a body of work of some note (or, rather, legend). When I spoke to Greg Gerding about the new mysterious author on his book label, University of Hell Press, he became very animated and excited. If such an up-and-coming publisher as Gerding gets that excited about a book that he is putting out, then it is definitely something I need to take notice of! So, as the curator of reading series Them’s Fightin’ Words, I asked Gerding if he could hook me up with Mr. Park to be one of my feature readers. The affirmative response was quick. Apparently, this was the first time 65-year-old Park had ever read. So, before the reading, Park and I had an opportunity to discuss our distaste for e-books, cell phones, videos games, and computers.

END_OF_DOCUMENT_TOKEN_TO_BE_REPLACED

Spend an evening with University of Hell Press at Powell’s on Hawthorne (3723 SE Hawthorne Blvd, Portland, Oregon 97214). Starts at 7:30pm and is FREE.

If you live in Portland, you can go to Powell’s City of Books on Burnside, Powell’s Books on Hawthorne, or St. Johns Booksellers NOW and get your copy.

Read selections from the book and find out where you can buy it online HERE. 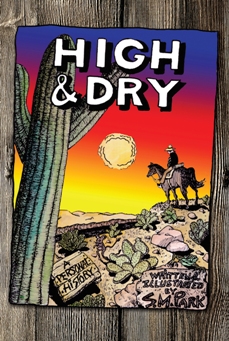 We are excited to provide a sneak peek at the cover art for Stephen M. Park’s book High & Dry published by University of Hell Press and coming out in stores soon. We will post when and where it will be available. Stay tuned!

Cover art by the author.